Hrachuhi Bassenz was born to a musical family in Yerevan, Armenia.  After completing her violin studies, she graduated with distinction from singing at the State Komitas Conservatory of her hometown with Professor Gayane Geghamyan.  Since 2006 Germany has been the center of her life and artistic creation. Her debut as Leonora in Verdi’s “Il Trovatore” was the start of her career.  Numerous roles have already become her calling card  including Norma, Violetta, Mimi, Desdemona, Leonora, Donna Elvira, Contessa Almaviva, and Adriana Lecouvreur, which occupy the most important position in Ms. Bassenz’s repertiore. She works together with renowned opera houses such as Covent Garden, Israeli Opera in Tel Aviv, Vienna State Opera, Semper Opera Dresden, Den Norske Opera & Ballet in Oslo as well as important conductors (Johannes Wildner, Marc Tardue, Daniel Oren, Antonio Pappano, Antonino Fogliani, John Fiore, Alexander Shelley, etc.) and directors (Laura Scozzi, Calixto Bieito, Mariame Clément, Dieter Kaegi, David McVicar and the legendary Elijah Moshinsky). In addition to the European repertoire, she participates actively in various cultural and charitable events of the Armenian Diaspora communities.

In 2011, she thrilled several thousand spectators in Europe’s largest classical open air concert in Nuremberg’s Luitpoldarena (Klassik Open Air) with works by Armenian composers such as Alexander Harutyunyan’s “Sing for Me,” Alexander Dolukhanyan’s “The Swallow” and Arno Babajanyans moving “Vocalise”accompanied by the Staatsphilharmonie Nürnberg under the direction of Dirk Kaftan. On the occasion of the 200th birthday of Giuseppe Verdi, Ms. Bassenz performed the Verdi Requiem under the direction of three different conductors:  with Bach Choir St. Lorenz and ensemble KONTRASTE conducted by Matthias Ank in the Lorenzkirche Nürnberg, in the Festspielhaus Congress Centrum Heidenheim with the Czech Philharmonic Choir Brno and with the Stuttgarter Philharmoniker under the direction of Marcus Bosch, and in the Meistersingerhalle with the Nürnberger Symphonic Orchestra conducted by Alexander Shelley.

Ms. Bassenz participates in benefit concert events organized by Dr. med. Margarete and Georg Walcher who founded the non-profit organization “Hajastan-Armenienhilfe e.V.” in Erlangen, Germany whose total proceeds will be donated to the orphanage in Vanadzor. On the occasion of the 100th anniversary of the genocide of the Armenians a solo concert was given by Ms. Bassenz entitled “Return Home!” accompanied by the collection of folk costumes by the artist and ethnographer Lusik Aguleci with generous public support (Ministry of Culture of Armenia, ZAD, Embassy of Armenia personally represented by the Ambassador Ashot Smbatyan, Armenian community Nuremberg) in the Gluck Hall of the Staatstheater Nürnberg. On the same occasion, she performed with the Jena Philharminie under the direction of the head conductor of WKO of Heilbronn and the Georgian chamber orchestra of Ingolstadt Ruben Ghazaryan with the works of Komitas and Babajanyan.

In 2016, Pope Francis’ visit to Armenia coincided with the invitation of the Chief Conductor of the Armenian Philharmonic Orchestra, Eduard Topchyan, to attend the solemn event in the Republic Square of Yerevan.

She has been awarded numerous prizes, including: “Singer of the Year” and “Audience Award” of the Musiktheater Gelsenkirchen, the Bavarian Art Prize, the 2nd prize of the international singing competition “Voci Verdiane”, as well as the “Gold Medal” of the Ministry of Culture and the “Komitas Medal” of the Diaspora Ministry of the Republic of Armenia.

CD recordings include the leading roles in Simon Mayr’s “Il sagrifizio di Jefte” and Vogel’s “The Golden Fleece”, “A Musical Sleigh Ride” with the New Philharmonic Orchestra of Westphalia, as well as contemporary music of Armenian composers such as. “The Divine Liturgy of the Armenian Church” by the Armenian composer Makar Yekmalian, “All Time Armenian Favorites” with the Kohar Symphony Orchestra and Choir (2003), “Vision” Vocal Music by Armenian Composers, and “Memories of Love” by Sirvard Garamanuk, accompanied by the famous pianist Sahan Artsruni (2005).

The biggest debuts in recent years are: “Norma” in the Israeli Opera Tel Aviv, “Adriana Lecouvreur”, “Donna Elvira” and “Simon Boccanegra” in London’s Royal Opera House, with live broadcast on the BBC 3 radio station, “Mimi” in the Dresden Semperoper and in the Vienna State Opera, as well as “Norma” in Den Norske Opera & Ballet. From the 2018/19 season Hrachuhi Bassenz is a permanent member of the ensemble of the Semperoper Dresden, where she performed the role debuts as “Marie” in “The Bartered Bride”, “Antonia” from “Hoffmanns Erzählungen” and “Madame Butterfly” with great success. In 2019 she appeared in Japan as “Desdemona” with Maestro Antonio Pappano, in London as “Violetta” with Maestro Daniel Oren and in the Opera Ball of the Slovak National Theater in Bratislava.

Audio clip: Adobe Flash Player (version 9 or above) is required to play this audio clip. Download the latest version here. You also need to have JavaScript enabled in your browser.

Audio clip: Adobe Flash Player (version 9 or above) is required to play this audio clip. Download the latest version here. You also need to have JavaScript enabled in your browser. 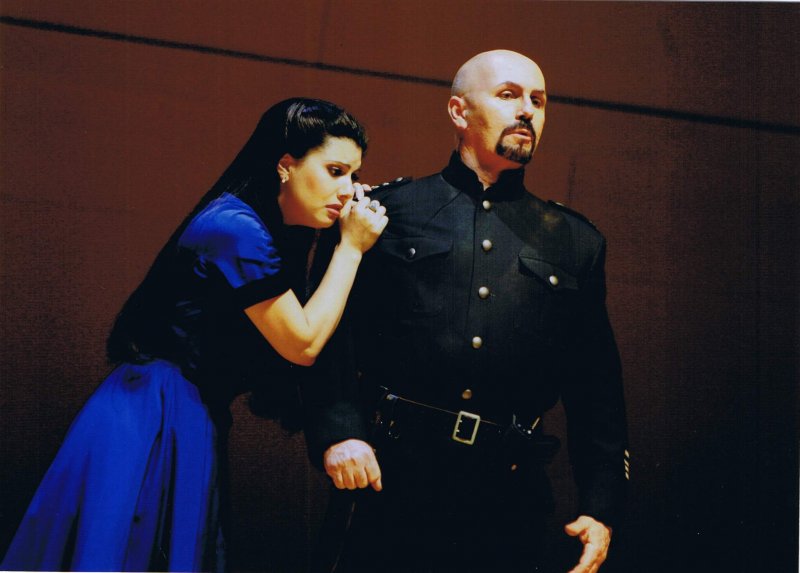